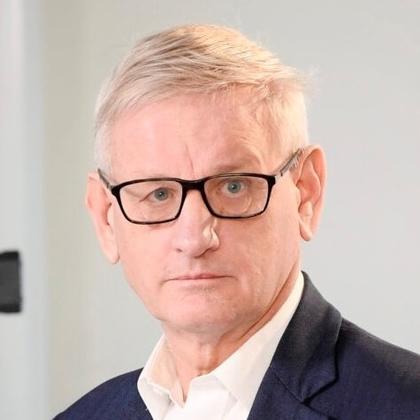 During the first period his government initiated major liberal economic reforms, as well as negotiated and signed membership agreement with the European Union. The reform period in the early and mid-1990's is generally seen as having pave the way for the successful growth decades that followed.

Subsequently he served in international functions with the EU and UN, primarily related to the conflicts in the Balkans. He was Co-Chairman of the Dayton peace talks on Bosnia and become the first High Representative in the country. Later, he was the Special Envoy of UN Secretary General Kofi Annan to the region.

Carl Bildt was an early advocate of the new ICT technologies. An 1994 email exchange between him and President Clinton was the first between heads of state/governments.

After stepping down as leader of the Moderate Party of Sweden in 1999 and leaving Parliament in 2000 he was also engaged in corporate boards in Sweden and the US as well as different international think-tanks.

Returning as Foreign Minister of Sweden in 2006, he come to be seen as one of the most prominent and vocal of European foreign ministers during those years. He was one of the initiators of EU:s Eastern Partnership, and pushed the EU forward also on issues of the Middle East.

Currently he is Co-Chair of the European Council on Foreign Relations, contributing columnist to Washington Post as well as monthly columnist for Project Syndicate. He recently chaired the Global Commission on Internet Governance.
He serves as one of the Senior Advisors to the Wallenberg Foundations in Sweden and is on the Board of Trustees of the RAND Corporation in the US.

@carlbildt has continued to push the use of social media also in international diplomacy.